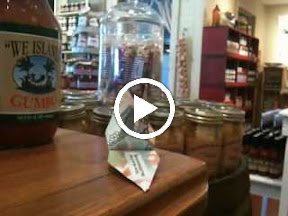 I'd like to say this video was purposeful, but my phone switched itself from photo to video (as it seems to do occasionally now. Perhaps my phone needs to be replaced after 2+ years.) So I apparently did not get a picture of it prior to releasing and my release was a small video. Kind of cool to know picasa accepts videos but I think I'll be sticking to pictures from now on, even if my phone doesn't want me to do so.

When I saw the sign saying free cider samples outside, I basically had to stop. I enjoy cider just as much as the next person, and free it a weakness word of mine. I tried the peach cider, which the cashier said was their most popular variety. Had I been able to pack a half gallon glass bottle of it in my carry-on without being over weight, I would've done so in a second. That's how good it was.
Posted by Sandy at 1:59 PM