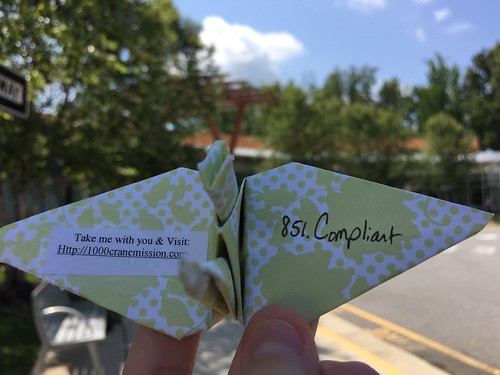 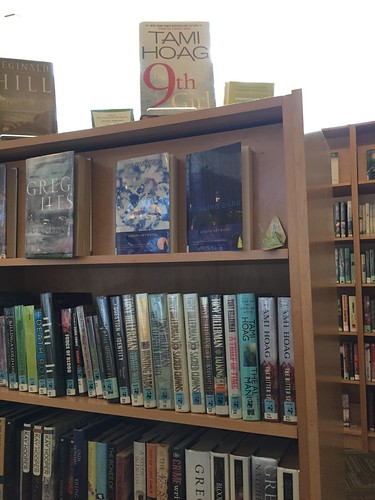 Where there is a library, there will be a crane placement! Driving down the highway, I saw the universal sign for a library and had to visit. This is such a lovely bright library! I imagine all the folks in the area like it. It definitely seems to have a wide variety of sections and amenities.
Posted by Sandy at 10:30 PM 0 comments 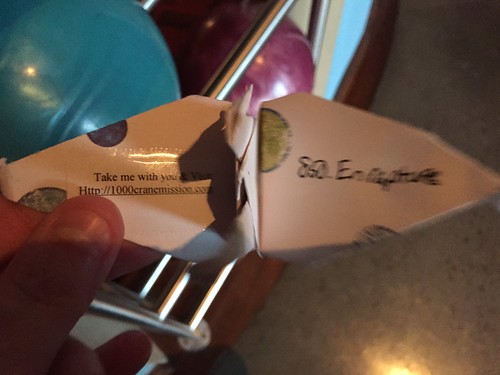 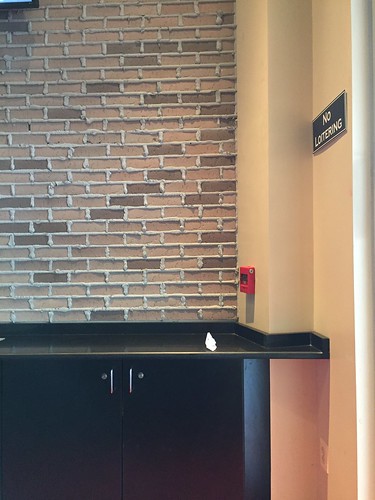 One of my favorite things to do, both at home and when traveling, is try to find local, non-chain eateries. Trying to find good food and support the smaller businesses where possible. If not possible, I at least want to try a chain that isn't one local to me. I had dinner at the Park Lane Tavern at the mall, which had pub style food. Definitely solid fare and good service. If I wind up staying in the same area again, I would definitely go back as there is a lack of good pub food in my area of NJ.
Posted by Sandy at 10:00 PM 0 comments 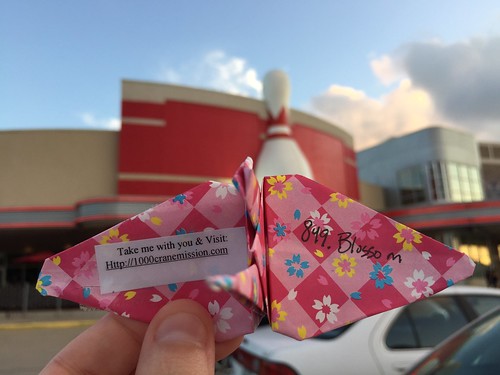 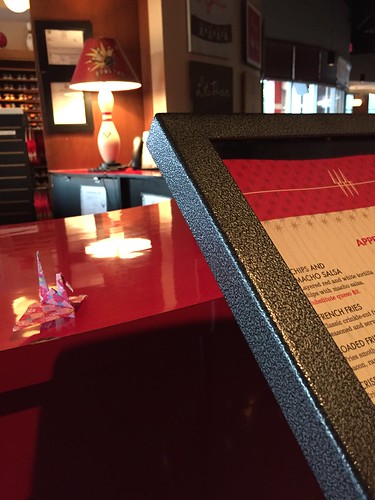 Splitsville is apparently half restaurant and with a couple lanes of bowling attached to a theater. I couldn't quite figure out what was going on. If I hadn't already picked up dinner, I would've been keen on sticking around to see what its deal was. If I happen to be back in the area though, I am certainly going to pick up a dessert there.
Posted by Sandy at 9:30 PM 0 comments 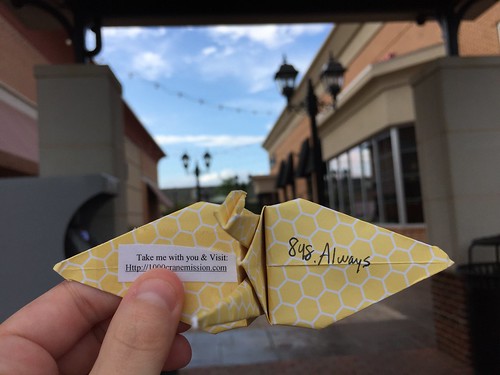 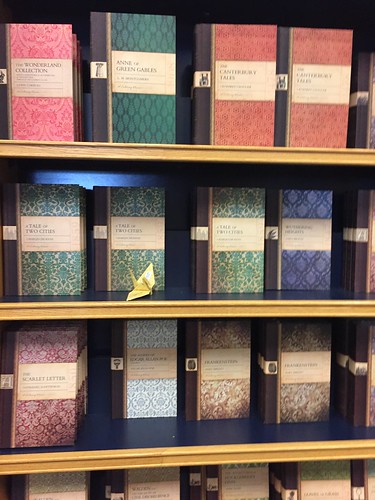 I popped into Books-A-Million before stopping into the mall for dinner. I do love a good book cover, as the ones shown here are. The reprints of classics often have such a fun and whimsical cover that I always make sure to look at them in any book shop I go into. I've not read near as many classics as I would like, but have a plan to start reading more of them starting in 2018. I'll definitely have to make sure to pick up a couple particularly pretty ones for my home library!

Found! This crane was found by an employee of Books-A-Million who then brought it to their manager. The manager e-mailed me letting me know she had found it, appreciated it, and would email me back once she had replaced it somewhere! Definitely will make sure to update this once I get word. Always love to hear from a crane finder!
Posted by Sandy at 2:41 PM 0 comments 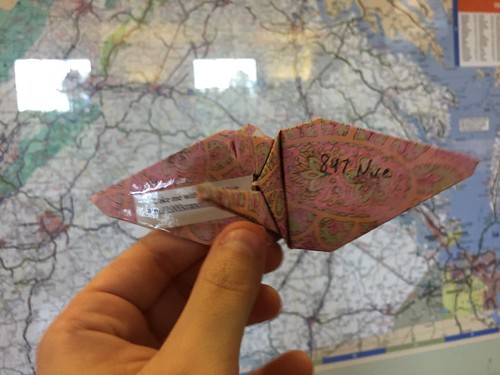 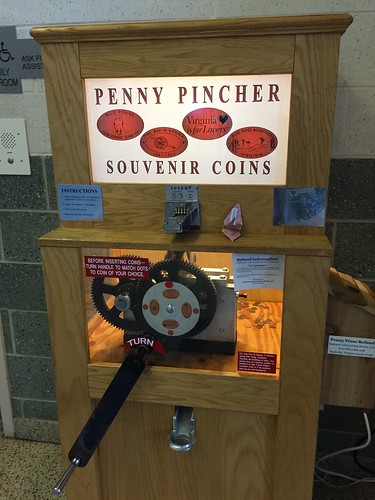 Continuing on to my training, I stopped at the Virginia Welcome Center and saw this really neat penny machine. I had always thought about doing one of those when I was a kid, but rarely had change on me. Much the same now, I didn't have enough change on me to make myself a penny. But if I get down there again, I certainly will make sure I do so.
Posted by Sandy at 2:19 PM 0 comments 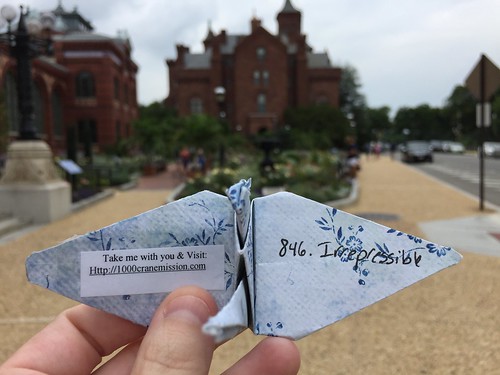 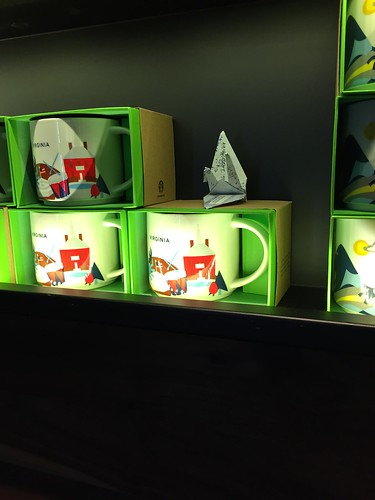 I requested to visit the newly opened FBI Experience at the Headquarters building in Washington, D.C. It is a museum quality exhibit open to the public on what it is like working for the FBI, the positions available, as well as the process to get from training into an office. It was really neat to see the inner workings of the FBI. They did a really great job with the different rooms as well as the information provided. They talked about some of the larger public cases as well as had a variety of videos to watch!
Posted by Sandy at 2:07 PM 0 comments 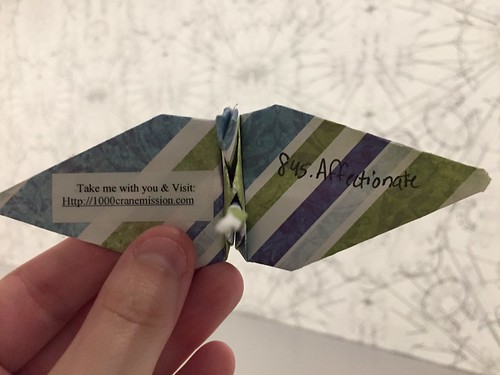 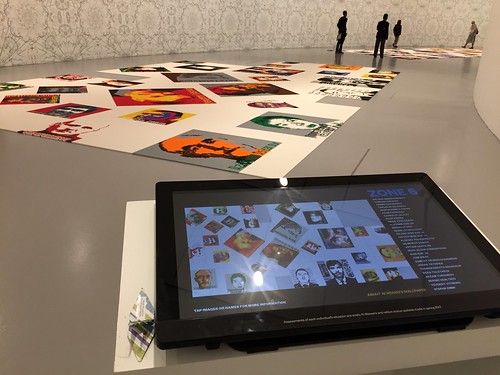 I stopped on over at the Hirshhorn Museum, which is a circular museum, a type I haven't been to before. The exhibits are placed on the floors an you basically go around in a circle, then pop down to the next floor. They had a really interesting exhibit on individuals famous for one reason or another made out of flat legos with a little screen that you can click on to get information about the individuals in that segment. Definitely different!
Posted by Sandy at 6:30 PM 0 comments 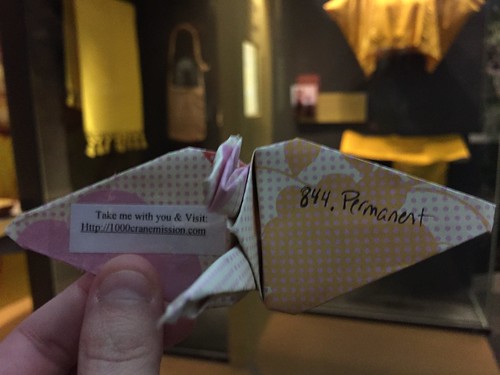 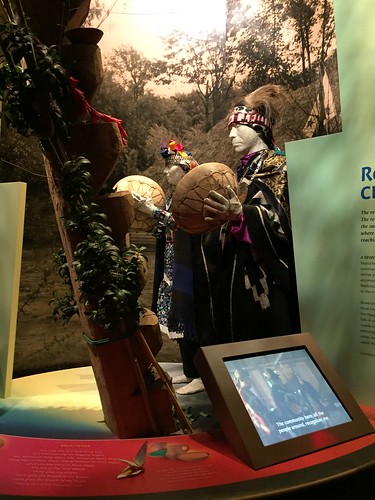 I stopped in to see the National Museum of the American Indian as I don't recall this being one of the museums I went to as a kid as I don't think it was even built! This was a very interesting museum with a lot of culture. I've not been to the museum of the same name in New York either, but look forward to going if it's even a portion as wonderful as this one. There were so many nooks and crannies in this museum that I highly doubt I even saw a small portion of what was on display. I look forward to visiting again in the future!

Update:// Eric from Illinois emailed me saying that he had found this crane on a trip to D.C. and brought it back with him to college in Illinois. Definitely one of the further replacements for sure! Thanks a bunch Eric for being part of this project with me! 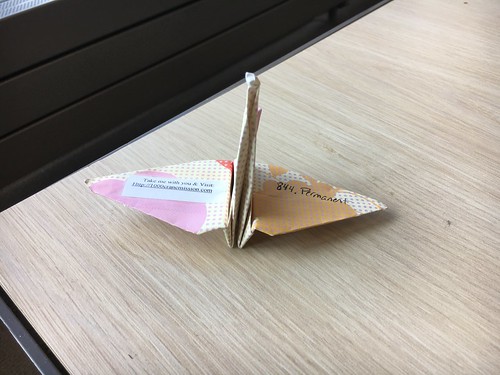 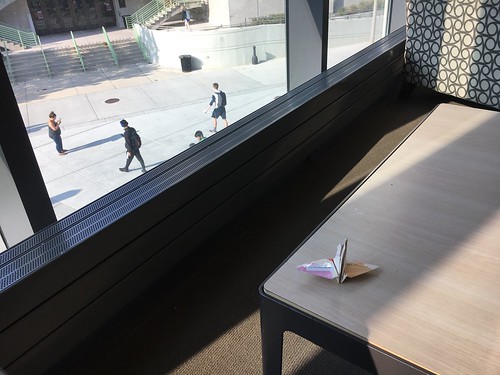 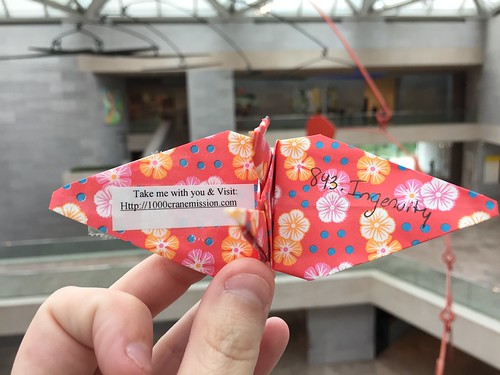 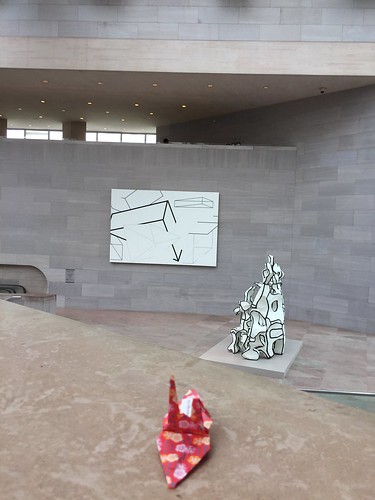 Modern art isn't quite my thing, but I did manage to find a couple of rooms that were non-modern in the east building of the National Gallery of Art. I definitely want to go back to the gallery to see all of the rooms that I managed to miss even with a map as well as the rooms that were only open for a limited amount of time during the day.
Posted by Sandy at 5:52 PM 0 comments 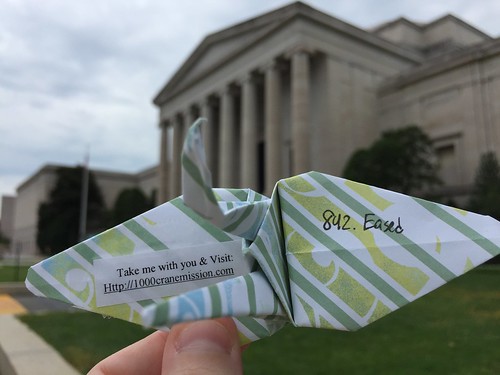 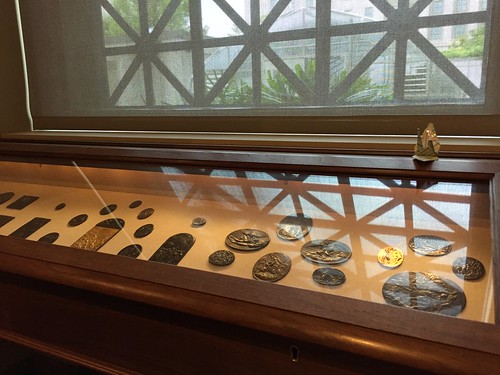 Having never been to the National Gallery of Art, I certainly wanted to take a walk through. That said, even with a map, I managed to get terribly lost! I think I only saw maybe about a quarter of the bottom floor before getting so lost and unable to find another gallery room or set of elevators to go to the top floor. I accidentally managed to be descending and entering the east building!
Posted by Sandy at 5:30 PM 0 comments 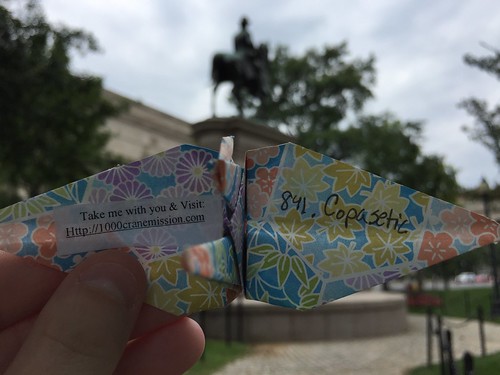 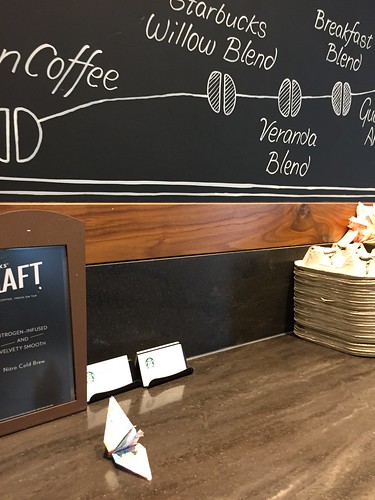 As most short jaunts, I tried to fit the most into my quick stint in the capitol. I did a fair bit of walking, trekked through museums, visited shops, ate as much food as I could, and was out in less than 8 hours. It definitely was a good time and reminds me how much I enjoy Washington, DC. It's even significantly more drive-able than New York, with much cheaper parking to boot. It's not too far away, but it's always just far enough away that I don't ever think about choosing it as a quick weekend away. Will have to remedy that in the future to see more of the stuff I missed!
Posted by Sandy at 5:15 PM 0 comments 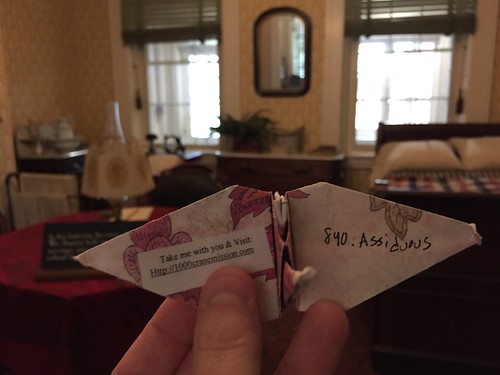 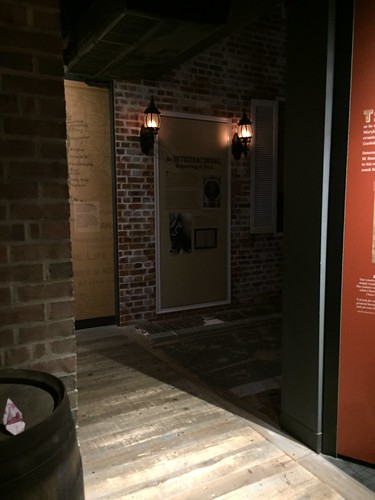 I popped over to the Petersen House, which is the location that Abraham Lincoln actually died in. It was a several story museum including the actual room where Lincoln died. The museum talked a lot about what was happening at the time as well as the other members involved, equality and what it means to you. There was also a significant column of books about Lincoln spanning all 4 floors of the museums. It was really well done and definitely made you think.
Posted by Sandy at 1:53 PM 0 comments 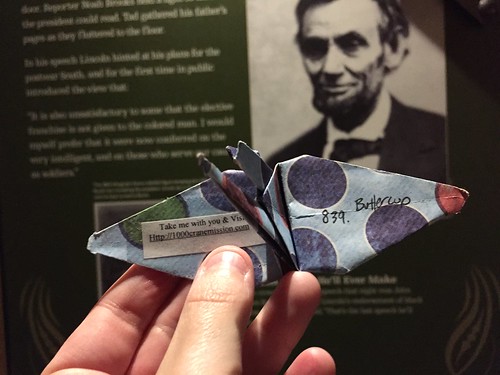 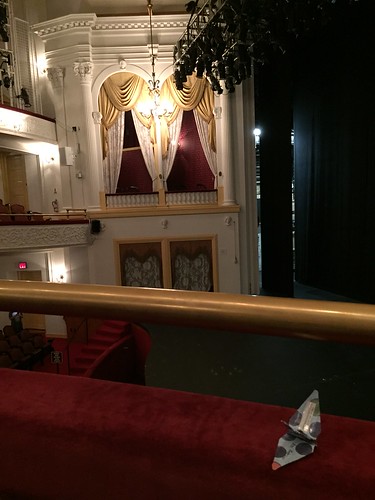 On my way down for a work trip, I stopped in Washington, D.C. to visit a couple friends. While I waited for them to get out of work, I popped around to a couple museums I hadn't yet visited before. The great thing about DC is the vast number of free museums, of which Ford's Theater is one. Most well known for the location in which Abraham Lincoln was assassinated, it is also back to currently being a working theater. There is a pretty interesting museum attached to the theater going over the timeline of events. I didn't realize that John Wilkes Booth, the assassin, had a larger plot with a number of other individuals who were also involved. I definitely recommend going if you are in the area and have some time!
Posted by Sandy at 1:45 PM 0 comments