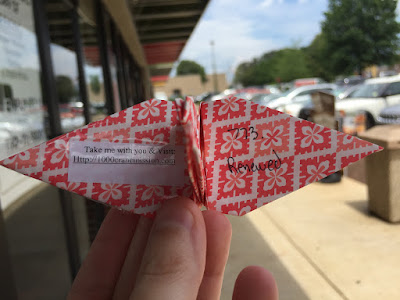 I don't often want to leave a crane without taking a picture of where I have placed it. However, when you're taking a one on one tour, where the guide has said you cannot take pictures indoors, it makes it considerably more difficult to sneakily get a photo! Rockingham is the estate where George Washington spent 2 months in residence at the tail end of the Revolutionary War. Having been moved to several different locations within a 1 mile area, it looks pretty darn good! I really enjoyed learning a bit more about the first President of the United States as well as more about the area. Having never even heard of Kingston, let alone been there, it definitely was a real treat! It is about 4-5 miles from Princeton, making it a convenient (at the time!) hour-long horse ride into the city proper. At the time of his residence, the U.S. Congress was actually holding court in Princeton. I had no idea!
Posted by Sandy at 11:24 PM